Get in the mood for “spooky season” with a virtual tour of some of the Frye’s more sinister art offerings brought to you by Gallery Guide Lynn Rosskamp. Meet a nineteenth-century artist-by-day and real ghostbuster-by-night, read the history of beautiful clothes that kill, and dare to descend with canine guides to the underworld. Cozy up at home on a blustery fall day with this online version of our popular Halloween-themed collection tour. 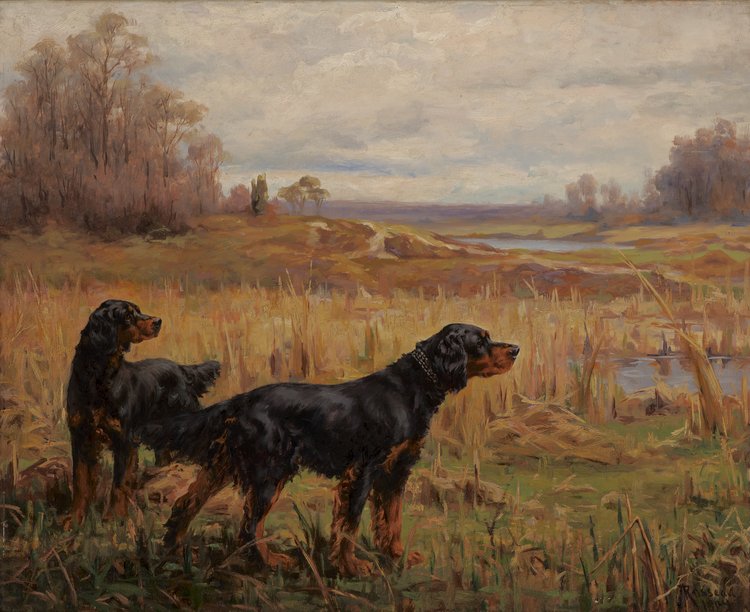 The first artwork is on view at the museum now as part of Human Nature, Animal Culture: Selections from the Frye Art Museum Collection. Charles and Emma Frye made their fortune from a meatpacking business, and so they were quite keen on images of animals, particularly the domestic kind that formed the basis of their business. You may think, “Gee, what can I find that’s spooky about cows and sheep and chickens?” Well, honestly, not much. However, there are a few paintings of dogs in the collection that did spark a connection between a seemingly innocent and beloved domestic creature—the family dog—and something rather more sinister. When looking at Percival Rosseau’s Two Gordon Setters in a Field  from 1904 (pictured above), not many of us would associate these canines with the underworld, but I thought differently…

Two Gordon Setters in a Field reminded me of the legendary “black dogs” that pepper stories from around the world, especially Celtic mythology. These black dogs were often thought to be omens of death. Some were even relatives of hellhounds who portended catastrophe or showed up at the gallows to take away the souls of wrongdoers down to Hell. Or perhaps these dogs are more neutral agents, like a psychopomp who ferries the souls of the dead to their proper place in the underworld. These conflicting ideas of the intent of the black dog seem to mirror humans’ relationship with canids in general—wolves and wild dogs are frightening and feel like agents of harm, while domestic dogs are our faithful helpers and companions.

Black dogs as symbols of death are found throughout world culture, but it is the British Isles where the black dog with the flaming red eyes seems to have truly settled into the collective imagination. There are stories about ghostly black dogs from just about every county in England, from the Black Dogs of Aylesbury, Bouley, and Lyme Regis, to the Moddey Dhoo roaming the Isle of Man, or the Yeth Hound who terrorizes the southwestern English county of Devon without its head. Even in contemporary culture, fans of the Harry Potter series will recognize the character Padfoot, a common name for the black dogs that are said to haunt the area around Leeds.

So perhaps these rather innocuous-looking hunting dogs, the subject of Rosseau’s Two Gordon Setters in a Field, may be more than meets the eye, at least for the couple nights of the year when the veil between the worlds gets thinner? 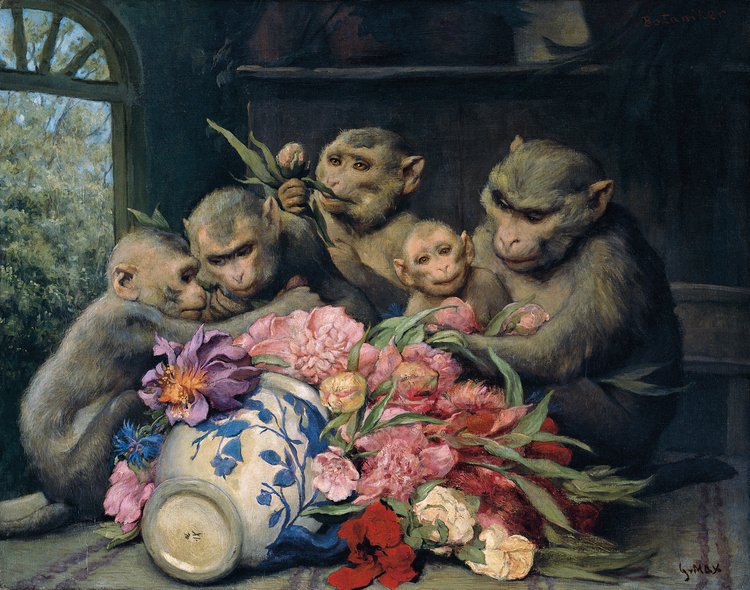 Our next work also explores spiritualism through the lens of animals. Munich Secessionist painter Gabriel von Max, who features prominently in the Frye’s Founding Collection, was extremely interested in the science of the soul. He was, in fact, a sort of nineteenth-century ghostbuster. Max was born in Prague in 1840 and was fascinated by both art and science from an early age. He was known to collect dead animals that washed up on the riverbanks near his home and to dissect them and reconstruct their skeletons. He was interested in anatomy and sought to draw and paint these subjects with precision. His interest in the natural, as well as the supernatural, world culminated in keeping a colony of capuchin monkeys at his home at Starnberger Lake.

Max's monkeys were allowed to range around the house as pets, getting into things and generally doing, well, monkey business. Max photographed his pets, and these photos became the basis for a series of paintings of the monkeys interacting with the trappings of humanity in ways that raised questions about human and primate nature. Max was interested in the theories of Charles Darwin, which were cutting edge and controversial at the time, upending a great deal of conventional ideas about humanity’s place in the order of the world. Take, for instance, the above work, which is in the Frye’s Founding Collection and also on view as part of Human Nature, Animal Culture. The very title of the painting, The Botanists, is a gentle poke at human conventions, showcasing curious monkeys examining a vase of flowers as if they were scientists themselves. Gabriel von Max’s love of animals brought the viewers closer to their fellow primates, and his interest in the scientific was never at the expense of his animal companions. 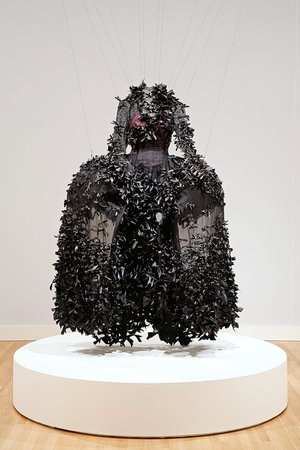 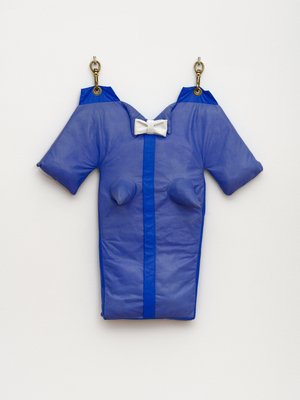 We now move into the supernatural liminal beauty of the 21st century. The Dorothy K: Bow Dress was created by the artist group Implied Violence, who were active in the creation of performances and installations both in Seattle and around the world during the early 2000s. Their performance pieces were ecstatic and extremist, often testing the physical and emotional limits of the performers. This dress is one piece from a larger performance called The Dorothy K. The Bow Dress became part of the Frye’s collection following an exhibition of the group’s work mounted in late 2010. The Frye has put on a number of shows featuring clothing items over the years and the current exhibition Recent Acquisitions in Contemporary Art features an interesting clothing-inspired piece by American contemporary artist Rose Nestler. Between the bright colors and sharp bustier of Dress for Success and the skeletal form The Dorothy K: Bow Dress, which might at first glance resemble a flock of black moths, I am reminded that sometimes beauty exacts a terrible price.

In particular, I am recalling the fad for bright emerald green dresses and silk flowers and leaves that left many wearers, and still more seamstresses and milliners, dead: real-life fashion victims. Until the nineteenth century, most clothing dyes were made from plants and other natural elements, but industrial chemistry changed all that—sometimes not for the better. In 1775, the German chemist Carl Wilhelm Scheele developed a green pigment using copper arsenite that came to be known as Scheele’s green. It was a dazzling emerald color, quite unlike any greens available in the textile houses of Europe to that time. It was wildly popular—and extremely poisonous. As some of you may have correctly deduced from hearing the word arsenite, Scheele’s green contained a significant amount of arsenic, which unfortunately would rub off on the wearer as their body produced sweat. Wealthy fashionistas reported feeling ill and finding blisters and rashes on their skin where the cloth touched their necks and wrists. However, while corsetry and petticoats would often luckily shield the majority of the wearer’s body from these deadly dresses, many of the women who worked in garment factories and as milliners’ aides making the silk leaves and flowers that adorned many of the fashionable hats of the day became extremely ill and even died from constant exposure to the dye.

The toxicity was known to a small vocal minority of scientists and health professionals, but the concerns were largely ignored because of the popularity and monetary success of the green products. It was not until the death of garment worker Matilda Scheurer in 1861 that the danger of arsenic poisoning became more broadly known, and the empire of deadly beauty came crashing down. The Ladies’ Sanitary Association, a public health organization, had an analytic chemist test some artificial leaves from a headdress. He concluded that the pretty floral headband had enough arsenic in it to poison twenty adults, while the average green ball gown could contain 900 grams of arsenic, from which fifty to sixty of the poisonous grains could powder off over the course of a single evening of dancing and mingling. In comparison, the lethal amount of arsenic exposure in adults is a mere four to five grains. It would take an additional thirty years for arsenic-based green dye to be regulated and for worker safety measures to be put in place to prevent accidental poisoning. 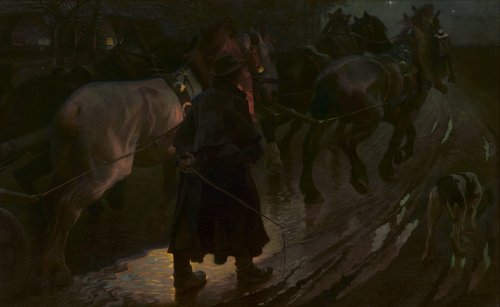 On that gruesome note, we will move on to our final image of the virtual tour, Christian Speyer’s 1911 scene titled Four in Hand, also currently on view in Human Nature, Animal Culture. This dark and atmospheric scene recalled to me the first few lines of Alfred Noyes’ famed 1906 poem “The Highwayman.” I encourage you to read this eerie, dreary text and imagine Charles and Emma reciting the lines to one another on a chilly October evening in their parlor, surrounded by all their paintings, glittering in the gaslight.