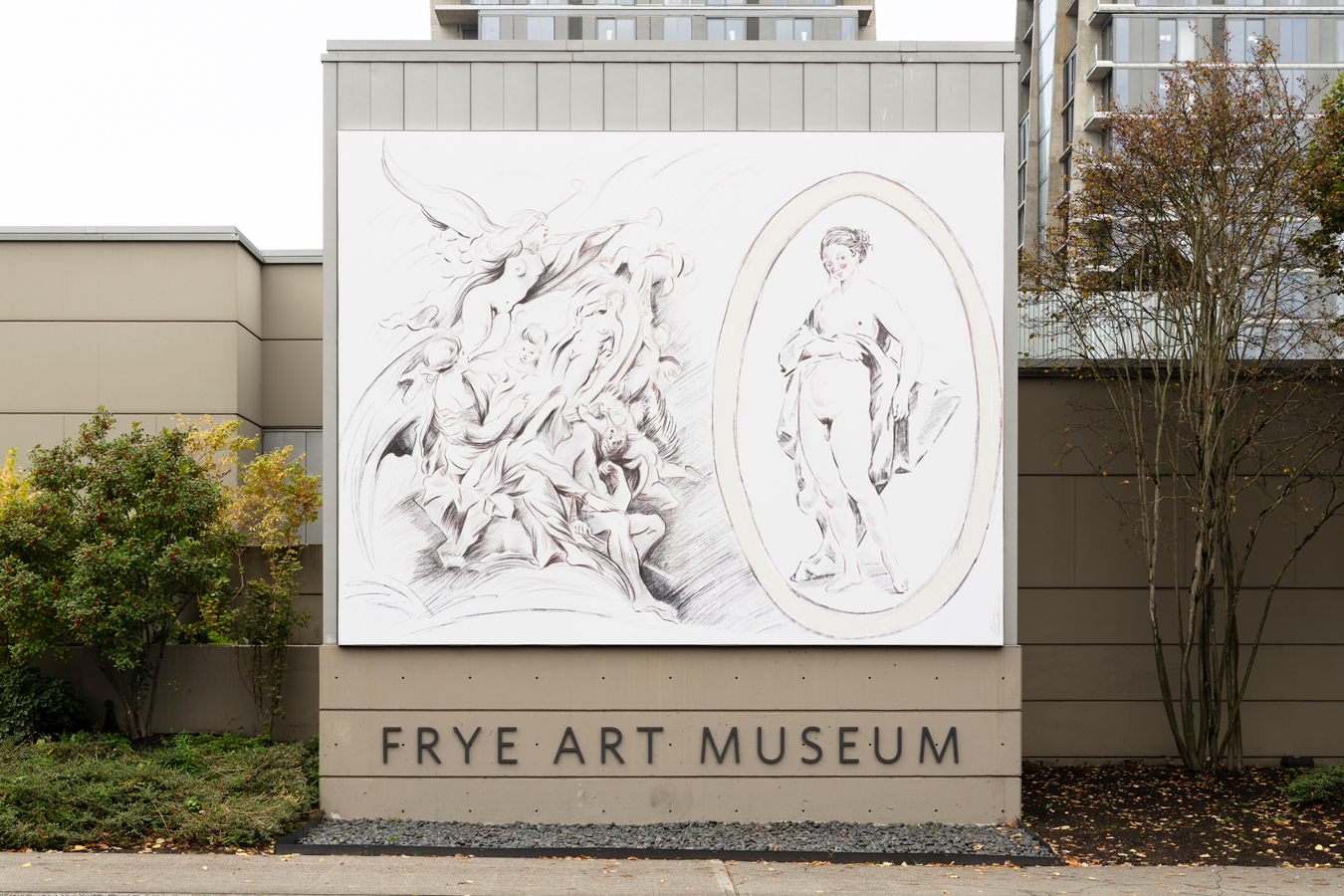 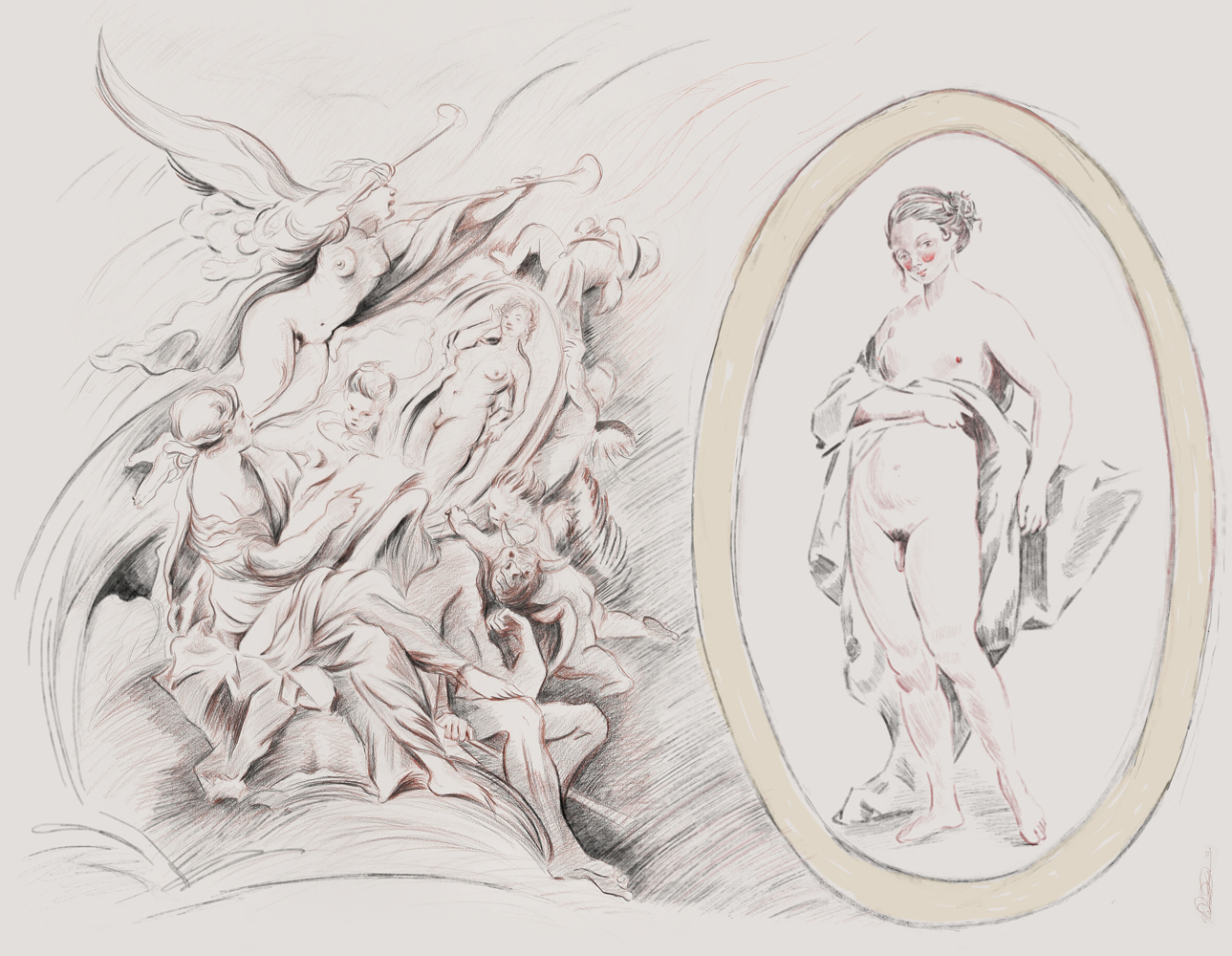 Seattle-based artist Molly Jae Vaughan’s work addresses representations of transgender people, including the erasure and violence they experience. For the next iteration of the Boren Banner Series, Vaughan will create a new work from her ongoing project After Boucher, in which she reimagines drawings by the French artist François Boucher (1703–70). Vaughan inserts transgender bodies and genderqueer mythological characters into the opulent and romantic world of Rococo—an eighteenth-century style of art and decoration characterized by its excessive ornamentation and pastel palette. In Vaughan’s hands, heroic queer protagonists fluidly inhabit Boucher’s pastoral scenes, creating visions of queer resplendence and pleasure.

Of her motivations for the project, Vaughan cites the exclusion of transgender people from the Western art historical canon. Boucher’s theatrical scenes of erotic and sentimental love reinvented the idyllic pastoral tradition, introducing an aesthetic of gender ambiguity. After Boucher creates a new visual history of transgender, non-binary, and gender nonconforming individuals within the context and imagery of the romantic and luxurious environments of the Rococo period. The monumental scale of the Boren Banner, a public artwork that occupies the eastern facade of the Frye Art Museum, asserts the visibility and agency of transgender people, not just within Boucher’s compositions but also into the institutional space of the museum and the collections housed within. Vaughan’s Boren Banner image dialogues critically—and playfully—with the nineteenth-century pastoral landscapes in the Frye’s Founding Collection.

Molly Jae Vaughan (British, born England, 1977) holds a Bachelor of Fine Arts from the School of Visual Arts in New York and a Master of Fine Arts from the University of South Florida in Tampa. Her work has been exhibited in solo exhibitions at the Seattle Art Museum and the Bainbridge Island Museum of Art and in group exhibitions at San Jose Museum of Quilts and Textiles, State of Fashion Biennale 2022 (Arnhem, Netherlands), the Block Museum of Art (Evanston, IL), the Henry Art Gallery (Seattle), and the Minnesota Museum of American Art (St. Paul). Vaughan was the 2017 recipient of the Betty Bowen Award and has received grants from Art Matters Foundation, Visual Artists Network, the Pollination Project, and the Hillsborough Arts Council. In 2018, Vaughan presented a talk at TEDXSEATTLE about her ongoing Project 42, which memorializes transgender murder victims. Vaughan is currently a Senior Associate Professor of Art at Bellevue College and lives and works in Seattle. 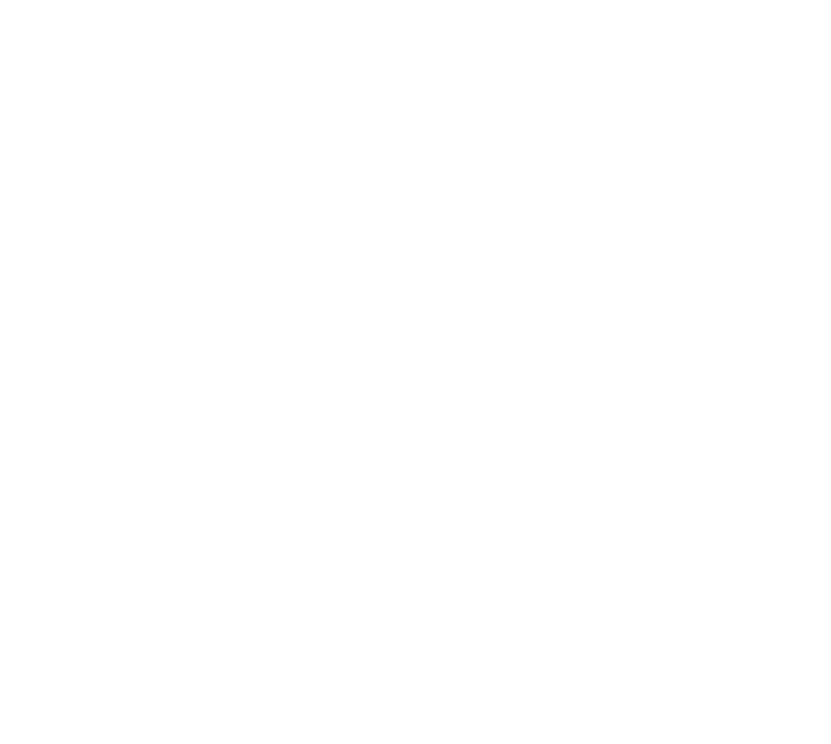