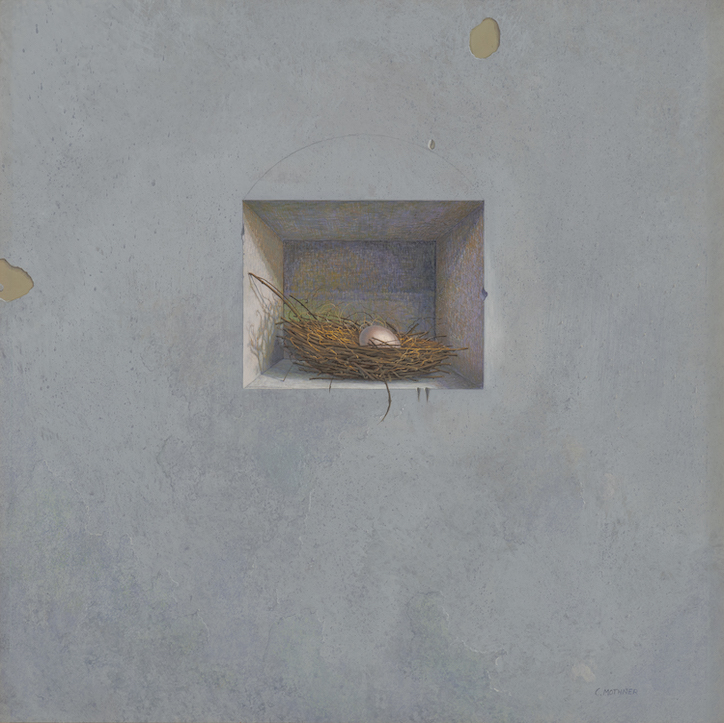 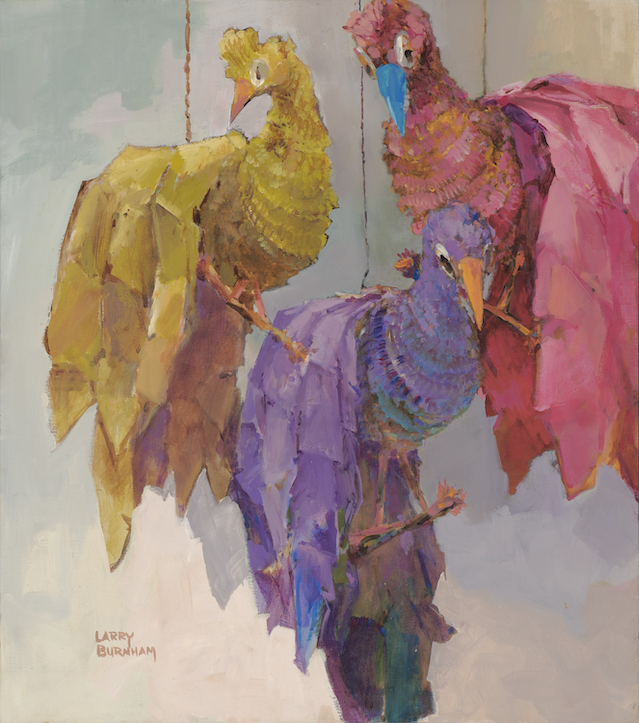 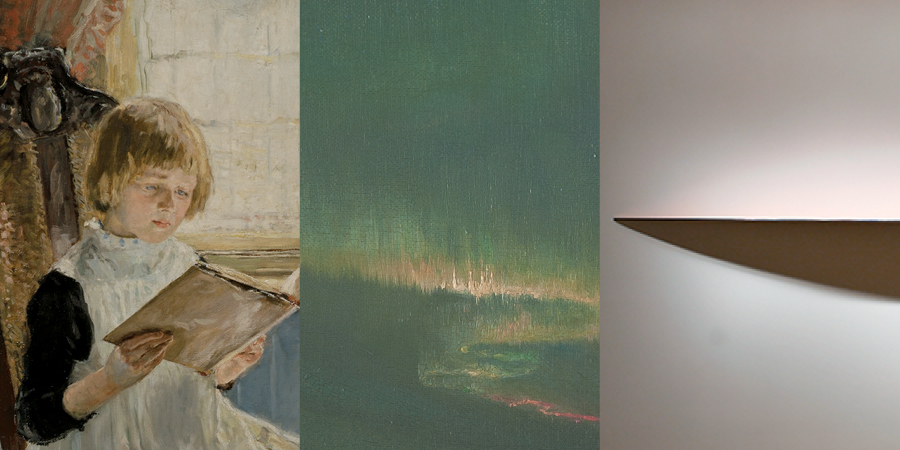 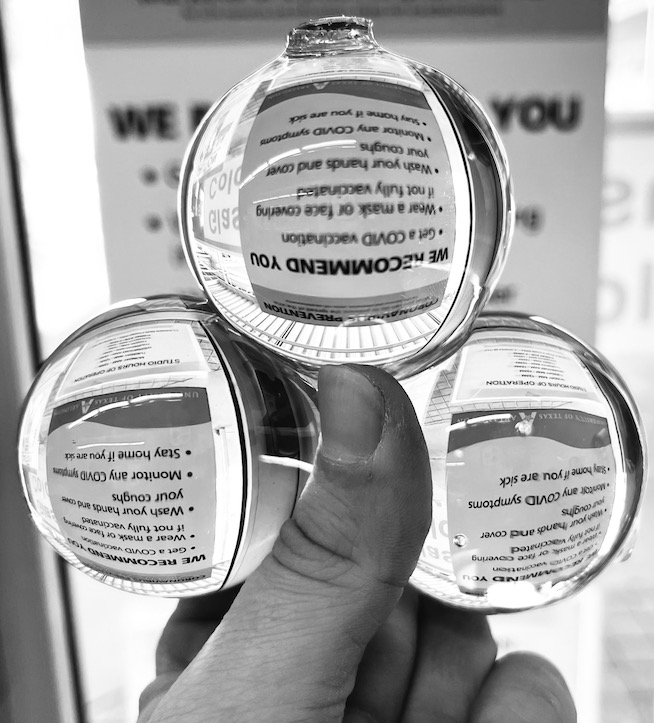 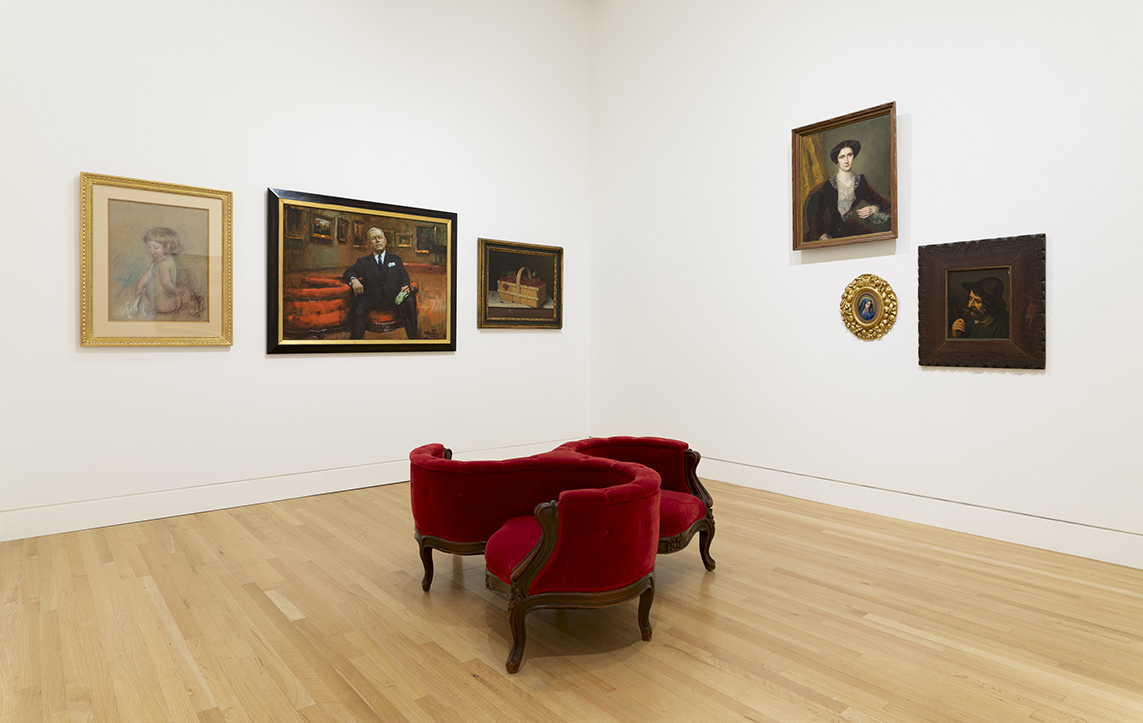 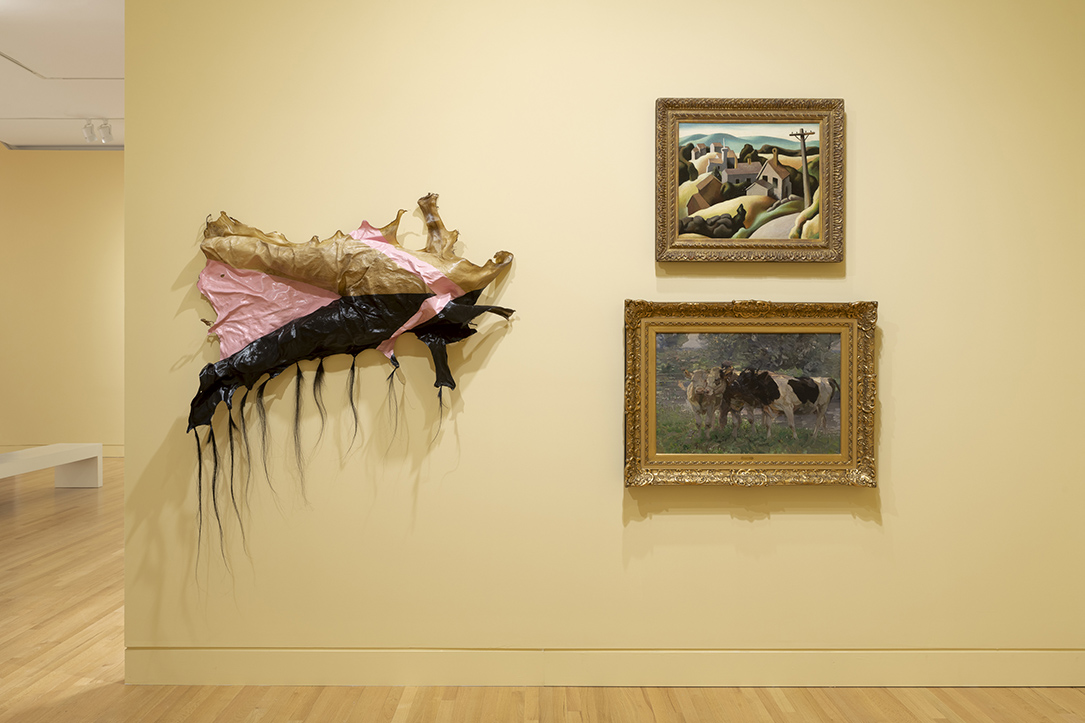 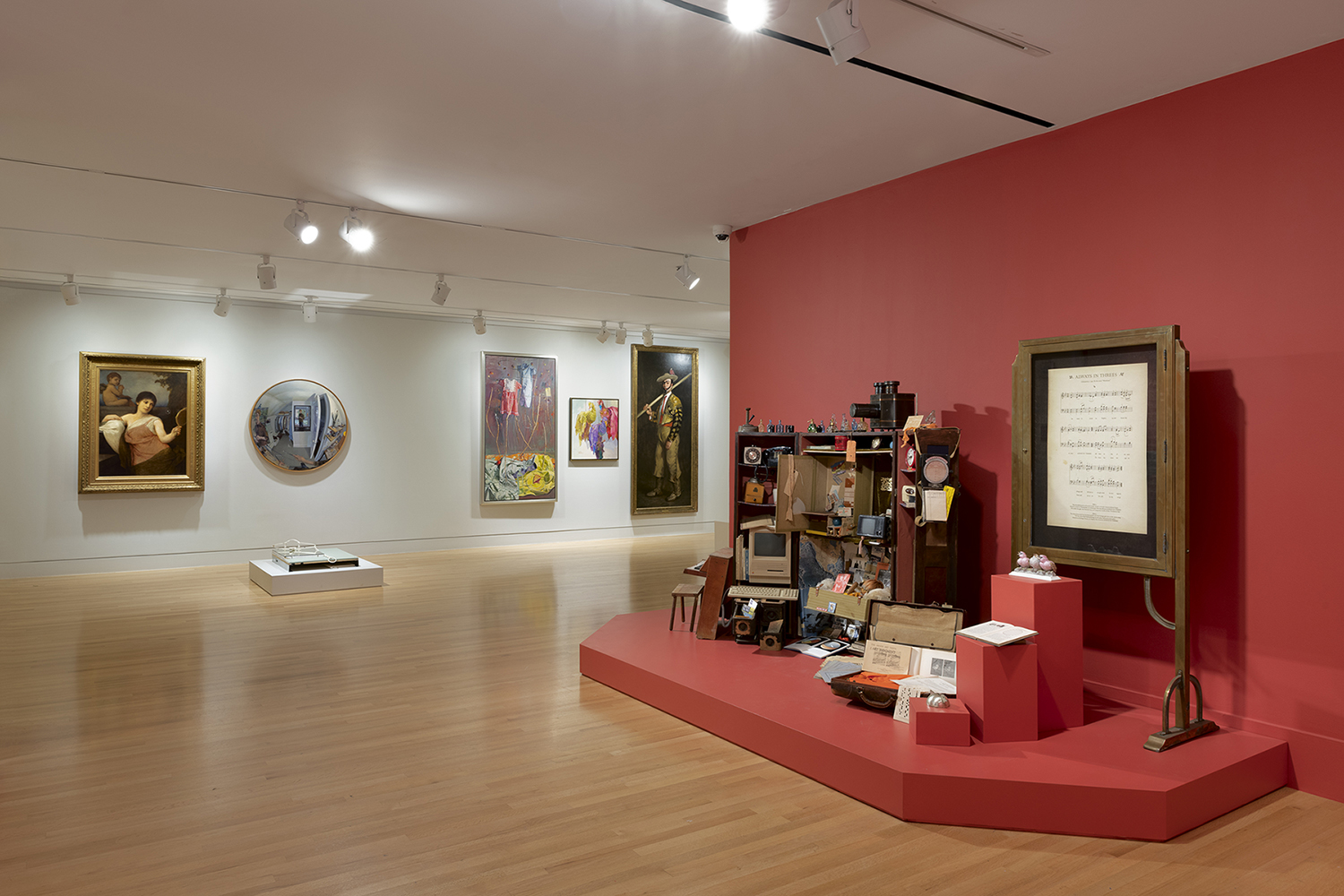 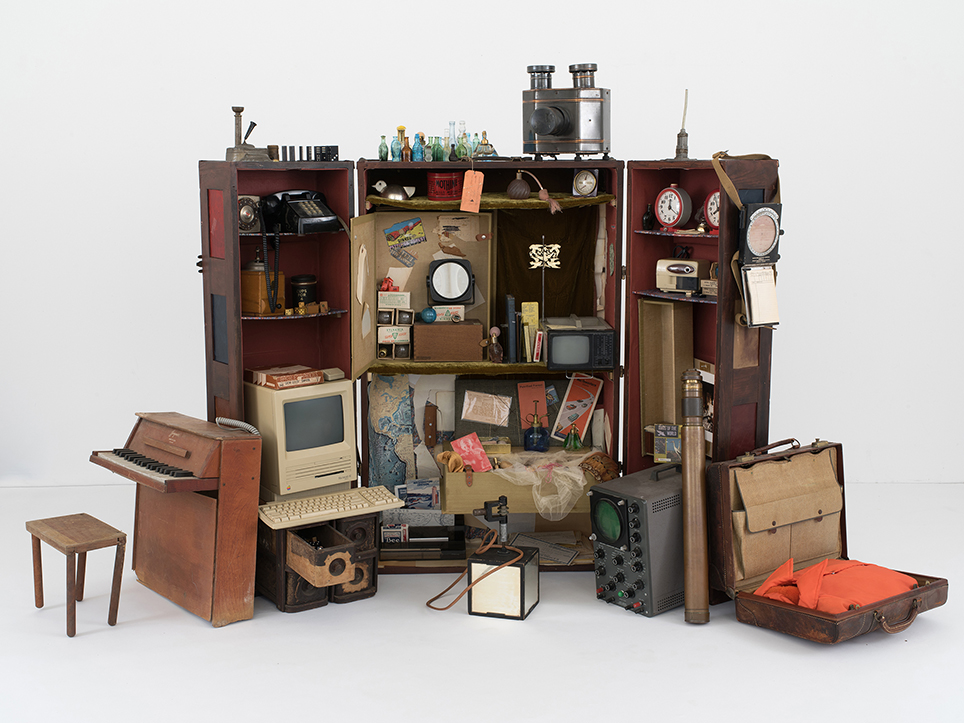 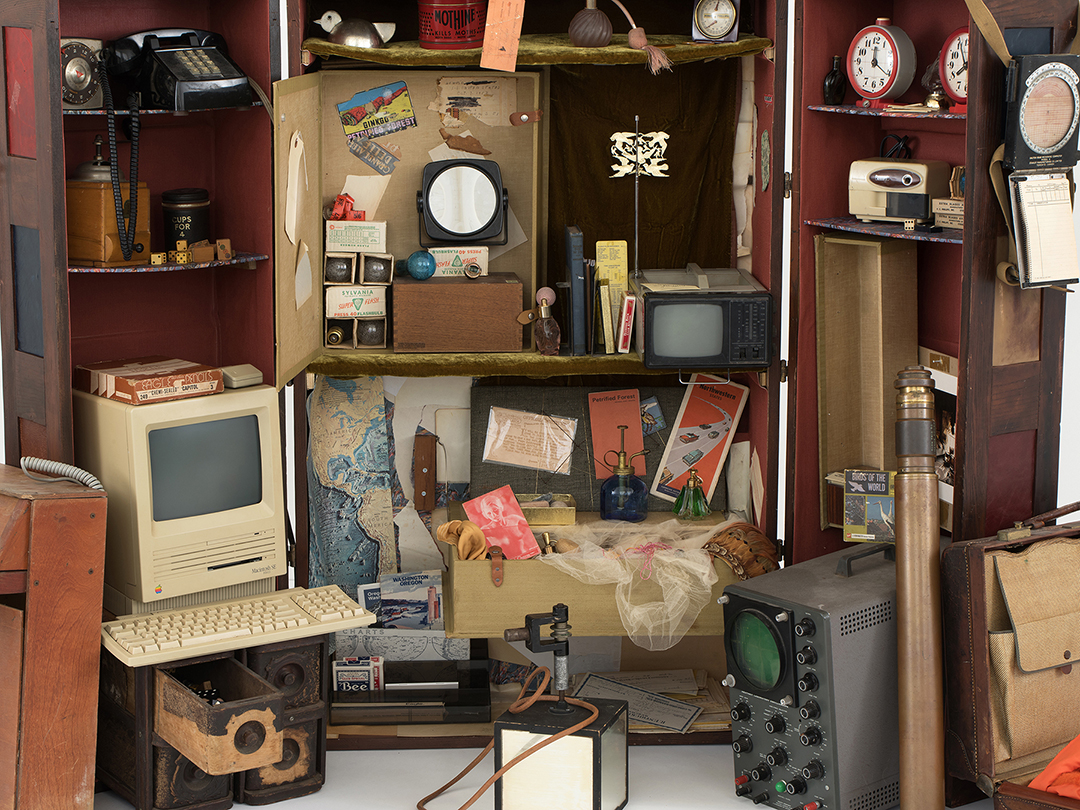 For this artist-curated installation of the Frye Art Museum’s collection, the research collective ESTAR(SER) reaches into an archive of dreams to assemble an exhibition that asks fundamental questions about museums and the works of art they hold: What do artworks want from us? And what do we want from them?

An ancient tale tells of an artist who once painted a child carrying a bunch of grapes. So lifelike was the image that birds came and pecked at the tasty-looking fruit. But the painter wasn’t satisfied. If the child had been more realistic, he reasoned, the birds would have been too frightened to approach. Determined, he reworked the painting, and, setting it outside, watched as three birds approached: the first glimpsed the child and fled, just as he had hoped; the second went ahead as before, and tried to eat the illusory fruit. But the third bird just landed in front of the painting and looked at it, in perfect stillness, for a very long time.

Embarking from this story of appetite, fear, and fascination, THE THIRD, MEANING stages much-loved works from the Frye Art Museum’s collection—along with some rarely seen treasures—in a series of triads, groupings of three that invite viewers to ponder the “Birdish” problem: Should we draw near? Turn away? Keep looking? Each triad aims to set up a small conversation (about form, about content, about history). Visitors are invited to eavesdrop on these quiet exchanges, occasionally with the aid of playful tools for focusing, diffracting, or remaking their perceptions. What is it like to look with avian eyes? And if the paintings were themselves birds, which is hungriest? Which would fly away? Which, gazing back, would stay?

No mere allegory, the “third bird” can be thought of as an avatar of attention. Through the attentive senses, every museumgoer participates in the making of a work of art. THE THIRD, MEANING circles the power and complexity of this remarkable human faculty: our ability to give attention, and to receive what it gives; the power to land in front of anything, and wait upon everything. In conjunction with the exhibition, a series of gallery interventions and activations configured by ESTAR(SER) will offer opportunities to test the creative possibilities of every act of sustained attention.

D. Graham Burnett works at the intersection of historical inquiry and artistic practice. He makes texts (and occasions) using experiential approaches to archival material, pedagogical modes, and hermeneutic activities traditionally associated with the research humanities. Based in New York, Burnett trained in the History and Philosophy of Science at Cambridge University and teaches at Princeton. He edits a series in speculative historiography, “Conjectures,” for The Public Domain Review (UK), and is the author of a number of books, including Masters of All They Surveyed (Chicago: University of Chicago Press, 2001); Trying Leviathan (Princeton: Princeton University Press, 2007); The Sounding of the Whale (2012); and Twelve Theses on Attention (New York: FoA/PUP, 2022), co-authored and co-edited with Stevie Knauss and the Friends of Attention, with whom he often collaborates. Burnett’s essays, pseudonymities, and metafictions have appeared in: Cabinet (where he is an editor), October, Parkett, Texte zur Kunst, TANK, Geist, and elsewhere, including the catalogue of the 55th Venice Biennial.

Joanna Fiduccia is an art historian, art critic, and assistant professor in the Department of the History of Art at Yale University. She is the author of Figures of Crisis: Alberto Giacometti and the Myths of Nationalism (New Haven: Yale University Press, forthcoming), as well as scholarship and criticism published in October, Art History, Parkett, Spike Art Quarterly, East of Borneo, and Artforum. A founding co-editor of the journal apricota and a collaborator with the Friends of Attention, her writing has also appeared in catalogues and essay collections including Maria Martins: Tropical Fictions (Sao Paolo: Museu de Arte de São Paulo, 2021), In Search of the Third Bird (London: Strange Attractor, 2021), and Alberto Giacometti: In Search of Lost Works (Paris: Editions Fage, 2020).

THE THIRD, MEANING: ESTAR(SER) Installs the Frye Collection is guest curated by the research-based artist collective ESTAR(SER), with D. Graham Burnett, Professor of History and History of Science at Princeton University, and Joanna Fiduccia, Assistant Professor of the History of Art at Yale University, as project leads.

Trefoil Looking Glass, from the collections of ESTAR(SER)

The Frye Trunk, from the ESTAR(SER) Collections. Photo: John Berens